CBS News was caught airing footage from an Italian hospital, claiming it was in New York City.

Italy remains the country hardest hit by the coronavirus pandemic, with the nation’s hospitals failing the stress test of dealing with an increased number of patients.

Apparently, CBS and mainstream media want you to think this happened here in the United States.

There’s no doubt the media are using the coronavirus pandemic to score points against President Trump in an election year, and it has become apparent some have resorted to using fake news in this campaign. 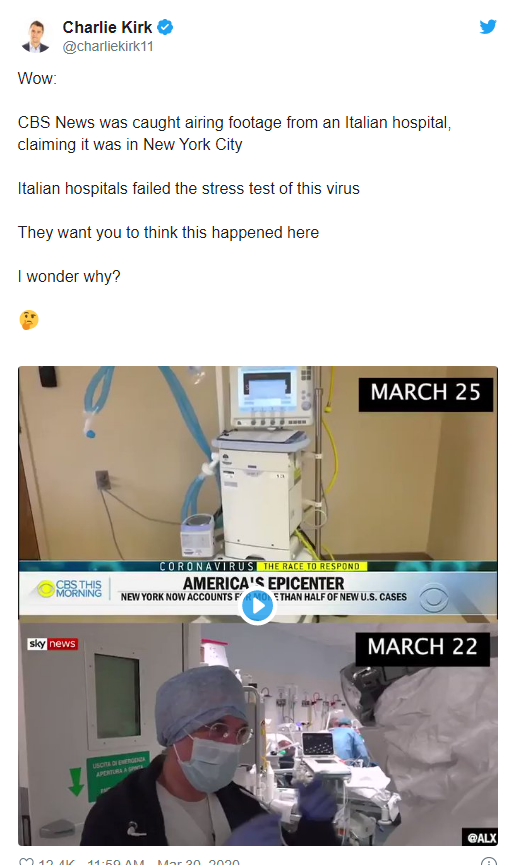 WesternJournal report: The report from CBS correspondent David Begnaud opens with him talking about how New York Gov. Andrew Cuomo said the federal government isn’t doing enough in the face of the coronavirus emergency, apparently walking back his previous praise.

The story went on to chronicle how New York City is especially hard-hit. “Crowded subway cars may have accelerated the spread,” Begnaud said over footage of a packed subway car, where a rider was wearing a blue medical mask (more on that later).

Next, Begnaud voiced over footage of a hospital room full of patients hooked up to ventilators. They lay in hospital beds clustered side by side as medical personnel in serious protective gear attended to them, driving home the dire straits in which New York City finds itself.

There’s only one problem: The footage is not from New York City.

In fact, it isn’t even from the United States; it’s from Bergamo, the Italian city hardest-hit by COVID-19. The footage can be seen here in a Sky News report March 22 about a critical shortage of ventilators in northern Italy.

Sure, it’s possible a producer used the wrong footage when putting the piece together, but given the alarmist tone of the story and its apparent pleading of the Democratic governor’s case, one has to wonder where “mistake” ends and “fake news” begins.

Besides the lies or errors, the most troubling thing about this piece was the tone.

There is no doubt the United States and New York in particular are in the grips of a crisis. COVID-19, as of Monday, had sickened 60,679 and killed 1,040 in the state, of which 790 deaths were in New York City alone, according to Johns Hopkins.

Because of the seriousness of the situation, it is important that the media be truthful in their reporting and not incite panic. This message was one that the president’s eldest son, Donald Trump Jr., thought every American needed to hear.

On Friday, he tweeted a clip from Dr. Deborah Birx of the White House coronavirus task force urging truthful coverage.

“Every American needs to know this,” Trump wrote. “You won’t hear it on CNN. They are only playing bad news.” 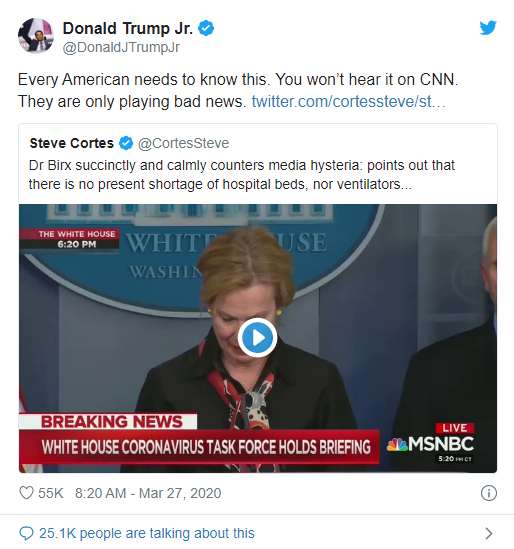 The Daily Caller’s Shelby Talcott tweeted that CBS claimed the Italian footage was the result of an “editing error,” according to the Daily Caller. 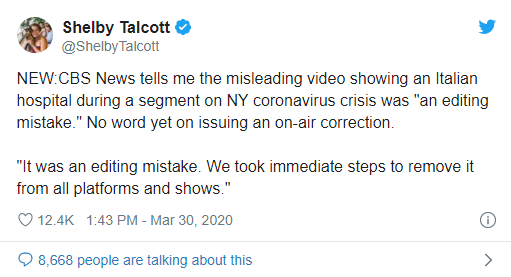 💻 Replace Windows OS for free with JoshWho OS and get your privacy back. https://www.joshwho.net/joshwho-os/